Enjoy FREE Shipping for orders over $99

9 Iconic Sunglasses That Shaped the History of Fashion

Sunglasses have been around since the 1200s, but in the 20th century, they started being mass-produced and became a style statement we all know today. Over the following decades, everyone from regular people like you and me up to A-list Hollywood celebrities owned at least one pair of sunglasses.

They weren’t only there to serve their primary function of protecting one’s eyes from the sun rays but became a style accessory that everyone saw as a necessity when leaving the house. Let’s take a look at a brief history of sunglasses and some of the legendary sunglasses that are famous around the world.

A brief history of sunglasses

Nowadays, it’s almost impossible to imagine there was ever a time before sunglasses, but the first appearance of the specs, as we mentioned, was in the 1200s. In the very beginning, smoky quartz was used for lenses and their primary use was to conceal judges’ facial expressions.

Fast forward to the mid-1700s, a London optician realized people with certain vision problems could benefit from glasses with green lenses, as green is the best colour to protect the eyes from the sun’s rays.

In the 20th century, sunglasses were still used primarily for eye protection for a short time as sufferers from syphilis were prescribed yellow and brown tinted glasses. As syphilis causes eyes to be sensitive to light, darkened spectacles were there to ease their discomfort.

But then everything changed and sunglasses, as we know them, were invented. The first instance of mass-produced shades can be traced back to 1929 when Sam Foster began selling them as a fashion accessory. From that moment forward, sunglasses were no longer associated with poor health.

It wasn’t long before sunglasses became a must-have fashion item on the Atlantic City boardwalk. In the 1920s, it wasn’t uncommon for movie stars to go out in public wearing sunglasses to stay incognito, but also to hide red eyes which were caused by studio lamps.

In the 1930s, the world witnessed the birth of polarized lenses which were created to reduce the risk of damage UV light brings to the eyes.

A few years after that, a company called Bausch & Lomb started producing sunglasses exclusively for the American military aviators, using a design that has stayed practically unchanged. Moreover, the public took notice when General Douglas MacArthur wore a pair of aviator sunglasses to the movies. As you noticed in this brief history of sunglasses, their primary use for centuries was to be an object that protected eyes. When polarized lenses were invented in 1936 by Edwin H. Land, their purpose was to block intense light that reflected off snow, sand, and other surfaces.

But when did functionality turn into style?

We can thank Sam Foster and his mass production of sunglasses for that, but only partly. And that’s because, as we all know, fashion is made by celebrities. As soon as movie stars started sporting shades, everyone wanted a pair for themselves.

In 1938, Life Magazine published that sunglasses were a “new fad for wear on city streets...a favourite affectation of thousands of women all over the U.S.". In that article, they also reported that 20 million pairs of sunglasses were sold in 1937, but only 25% of people wore them to protect their eyes.

However, function and fashion were combined, as most sunglasses were made with polarized lenses, but frames and the colour of lenses changed to keep up with fashion trends. And if we take a look at fashion shows now as well as modern trends, we can see that this is still the norm.

After such a fascinating history, it’s no surprise that there are some iconic sunglasses today that people all over the world love to wear. Here are some of them.

Ray-Ban was the first sunglass brand that ditched the then-traditional metal frames and created a model with a plastic frame in 1952, and that’s how the Ray-Ban Wayfarer was created. This was a revolutionary moment that was cemented in history when celebrities started wearing Wayfarers.

Everyone from debutantes to beatniks started wearing Wayfarers and in the 50s and 60s, you could see them on celebrities such as Bob Dylan, James Dean, John Lennon, and many others. Today, you can find Wayfarer sunglasses from different manufacturers as well such as Otis and Zeal Optics. This model will forever remain in history as the first sunglasses created by Ray-Ban. They’re easily recognizable, as they’re often made in mirrored, coloured, and wrap-around styles. As we already mentioned, they gained popularity in the 1940s thanks to Douglas McArthur.

However, their rise to fame was greatest in the 1960s during the rise of the hippie counterculture and the brand shot into icon status in the 1970s thanks to celebrities such as Paul McCartney and Freddie Mercury. Oakley put their sunglasses on the map in 1985 when they were first released in over 50 countries and retailed for $40 USD. They dominated the 1980s and were popular amongst extreme sports personalities.

They also had a comeback in the mid-2000s when they were re-released and came in various colours and styles. Their rise back to popularity was helped by an endorsement from celebrities such as Chris Hemsworth, Shaun White and Julian Wilson. Carrera is one of the world’s highest-selling eyewear brands and in 1986, they released their most successful eyewear collection, the Boeing series. These glasses come with very lightweight frames and anti-glare lenses and they’re best known for being popular and functional for people in the aviation industry. Persols were created in 1917 by Giuseppe Ratti who strived to create eyewear that offered quality protection and style. They were originally designed for pilots and sports drivers, but are worn by everyone even today. While Persol came out with many models over the years, none are as popular or classic as their 714’s.

These sunglasses are often seen as a sign of class and elegance, with many celebrities such as Steve McQueen, Ryan Gosling, and Pierce Brosnan sporting Persols over the years. When Tom Ford became head executive of Gucci in 1990, he developed many new products, one of which was the extremely popular Gucci sunglasses. Gucci sunglasses are now often seen on celebrities such as James Franco, Mariah Carey, Jennifer Aniston, and Kanye West, just to name a few.

Versace is a brand that needs no introduction and they developed eyewear for both women and men. This is another brand that’s adored by celebrities and is considered a classic piece that complements many styles.

Various models rose to popularity thanks to celebrities. The Gianni Versace eyewear style was made popular by singer Rihanna, but the same model was also loved by The Notorious B.I.G. in the 90s. A vintage model called Perspectives 402 resurfaced when it was worn by singer Lady Gaga in a commercial. 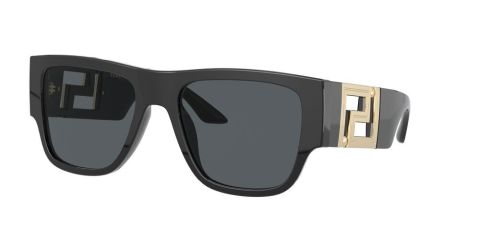 Maui Jim is an internationally renowned company that makes eyewear with their patented PolarizedPlus2 technology. Their sunglasses enhance colour in bright conditions, are scratch and smudge-proof, and also impact resistant. They come in four different lens colours, all for different sun conditions.

This brand is a favourite among eye care professionals, as their glasses provide complete protection from harmful UV rays and manage HEV.

Quay Australia is a brand that creates sunglasses with music-inspired roots and a Melbourne flair. They are a favourite for individuals with fearless style, carefree attitude, and fresh perspective. They come with signature oversized frames, a playful yet infinitely edgy range of designs, and all of that at a very affordable price.

When sunglasses were first created centuries ago, nobody could have guessed what they would become and the impact they would have on the world of fashion. When you look at all the celebrities and everyday people who can’t go a day without their favourite shades, it’s easy to see how big of an impact sunglasses have on our lives.

And while there are countless brands from various manufacturers all over the world, nothing can beat the nine iconic sunglasses that we listed in this article. If you feel like getting a pair, go to our eyewear category and find your perfect sunglasses for this summer.